Arrival review: So a woman is The Communicator and a man is The Scientist – guess who wins?

Alien spaceships land all over the world throwing NATO and every sovereign nation into chaos. How do we deal with these strange beings in their shell-shaped vessels? Do they come in peace and if so, what do they want? And of course, can the human race collaborate across the world and decipher their booming grunts? It’s clearly a job for the American military – spearheaded by the always most excellent Forest Whittaker and the only woman on Earth equipped for the job…

Fast becoming Woman Of The Moment – since she’s also in Tom Ford’s excellent NOCTURNAL ANIMALS – Amy does a stellar job (see what I did there?). She’s going to talk to these two huge octopus-like creatures who draw very pretty circular pictures in let’s call it – ink – and she’s going to be asking a lot more than ‘What’s your favourite colour?” or “Is there life on Mars?”

But there’s so much more going on than that of course… there’s the ‘meet cute’ with Jeremy Renner doing his best Pragmatic Scientist Acting and who, despite not have the stomach for Alien Work, you know is going to come around to Amy’s brilliance and charm and who somehow is going to fit into the seemingly non-linear story of her daughter lost to a hideous and tragic teenage disease. Amy is carrying all that with her in dreams and clever flashbacks… or is she?

However, there are no new stories film fans… and you knew that already.

Besides the amazing cinematography and the comparatively minimal use of CGI, the beauty of this film is The Message. Yes, of course it’s a sci-fi which, to be honest, is not my favourite kind of film. Most are so blimin’ far fetched, loud and shouty as to be laughable – I’m looking at you INTERSTELLAR and PROMETHEUS – But this film draws you in because of the human element, with all its nods to CLOSE ENCOUNTERS, SILENT RUNNING and all the other ‘this isn’t about space but something much bigger and at the same time very human’ films. A couple of times, I found myself sitting forward on my cinema seat, chin on hands, mouth agape waiting for the next wonderful moment. An experience I don’t remember having since seeing Ridley Scott’s BLADERUNNER in 1982.

Directed by Denis Villeneuve, who also made last year’s SICARIO, this effort from the French Canadian does much more than he said on the tin of his last film. Call it sexist, but in a good way. Amy still has to fight her corner, stand her ground, break the rules, nearly lose her job and her life, but because she takes time to listen, try new things and be present with the very beings she’s trying to communicate with… she wins.

Amy Adams as Louise Banks in ARRIVAL by Paramount Pictures

Check out our other Reviews. 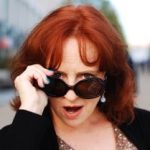 Alexandra Boyd‘s been in the film industry for over 30 years. She’s passionate about film and the roles  women play in film – in front of and behind the camera. She spent ten years acting in Hollywood where her film credits include James Cameron’s Titanic, Mr Holland’s Opus and Luc Besson’s From Paris With Love. She returned to the UK, and after a stint on Coronation Street, become a screenwriter and film director.  She is shooting her debut feature, Widow’s Walk, a supernatural thriller set in her native Suffolk. www.NewThirtyPictures.com On Twitter: @AlexActWrDir  Check out Alexandra’s other fabulous film reviews.