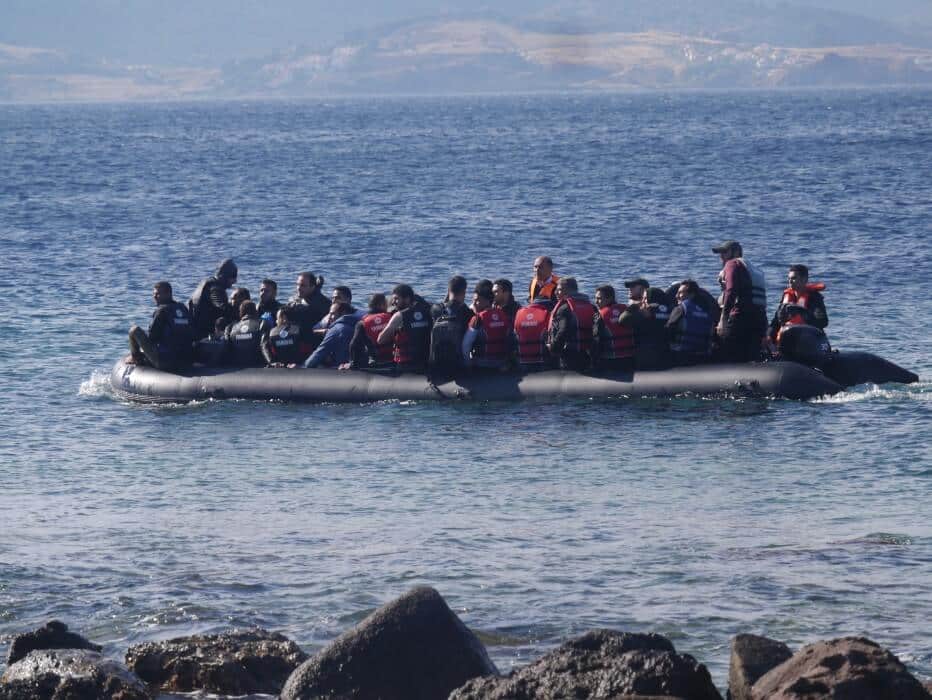 As told by Kulvinder Jhalli.

In October 2015, Kulvinder Jhalli decided to use part of her Greek holiday to help the refugees in Lesbos who were arriving every day from Turkey. Here she tells what it was like.

How did you come to be in Lesbos helping the refugees there?

I was going to a wedding in Greece and thought I would explore some of the islands. Then I started to see everything that was going on with the refugees. I just thought I couldn’t go to that part of the world without doing something to try to help. It just didn’t feel right. I heard stories about people cancelling their holidays but I decided I wanted to go.

So I put out a post on Facebook asking for ideas about how I could help. A Greek guy I know in London put me in touch with someone in Greece who then put me in touch with a local charity.  I asked for donations too and raised €1000 in just 3 days.  I wished I’d had more time to raise more money but it wasn’t possible. So after the wedding I went to Molyvos on Lesbos, having made contact with the Help for Refugees in Molyvos charity. I got the ferry from the island of Samos to Mytilene, the capital of Lesbos.

I met a Greek social worker on the ferry who was working with the refugees on Samos. I asked him what I should do with the money I’d raised. He said to spend it on medicine because the people were sleeping outside, the conditions weren’t good and it was only going to get worse as it got colder.  He also told me horrific stories about the refugees, how traffickers were stealing children, killing them and selling their organs. Or selling children into sex trafficking. He said there were so many refugees arriving it was impossible to check on all the children and who they were travelling with.

What happened when you arrived?

I went to a restaurant in the beautiful harbour of Molyvos and met Emma, a long term volunteer, there. She told me their daily food bill was €1500 just to give the refugees a sandwich and a banana as there were so many arriving! With no formal source of funding, the charity workers were reliant on volunteers for these funds just to feed people. So my money went on food instead of medicine. 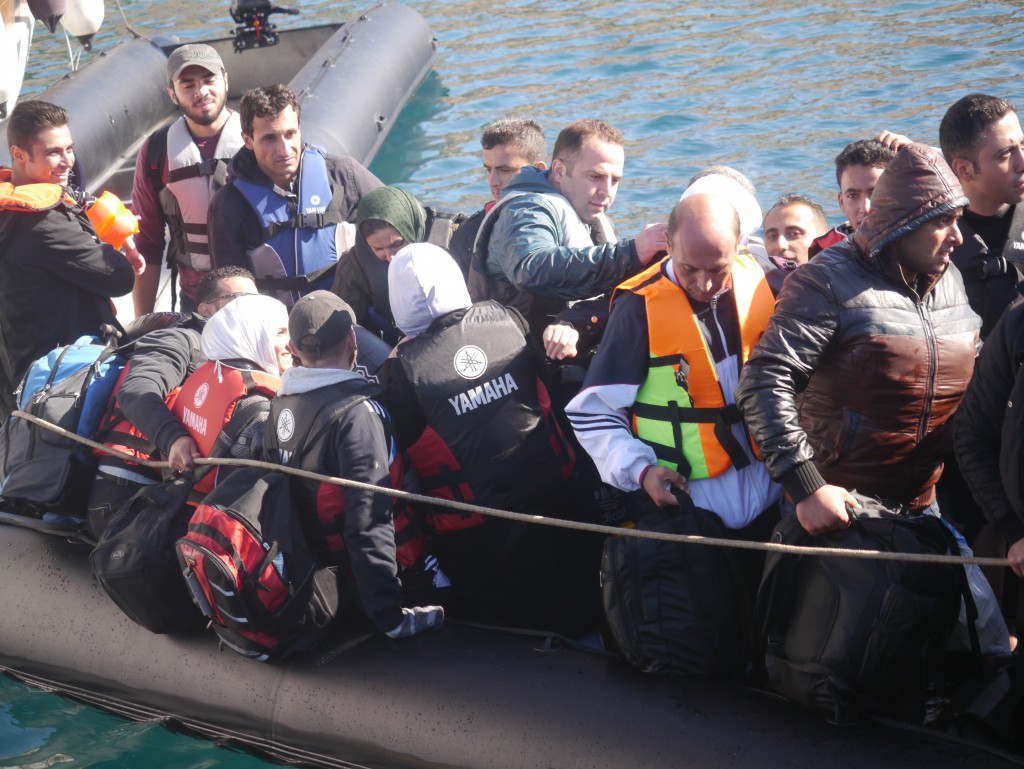 That first morning nothing much seemed to be happening and it seemed a bit disorganised. But then suddenly a boat came into the harbour. It was a small boat and there were about 40 people in it, all of them completely drenched. The Greek coastguards told me they disposed of these cheap boats, which cost about €2-3000, as they were no longer of any use after the crossing. Once we’d got the people out of the water, we gave them rescue blankets. It wasn’t until later that I found out the blankets were no use to them when their clothes were still wet.  Just getting them dry was a challenge.

I got talking to a young Syrian girl and her uncle helping them with their bags. I asked where the girl’s mother was and was told they couldn’t all come and that the mother had small children. So they’d stayed behind.  I’d heard that the refugees save up for one or two members of their family to come hoping they’ll then get asylum and be able to bring their family over too.

The first day wasn’t too bad. But the next day I volunteered in the morning in the same place and then went to another place called Oxy again helping people off a boat but this time at 7pm in the dark. Again they were drenched but we had no dry clothes for them which was awful. There was one family with a small baby who were going to be sleeping outside that night. They asked for dry clothes for the baby but all we were able to find was a dry towel. It was very distressing. 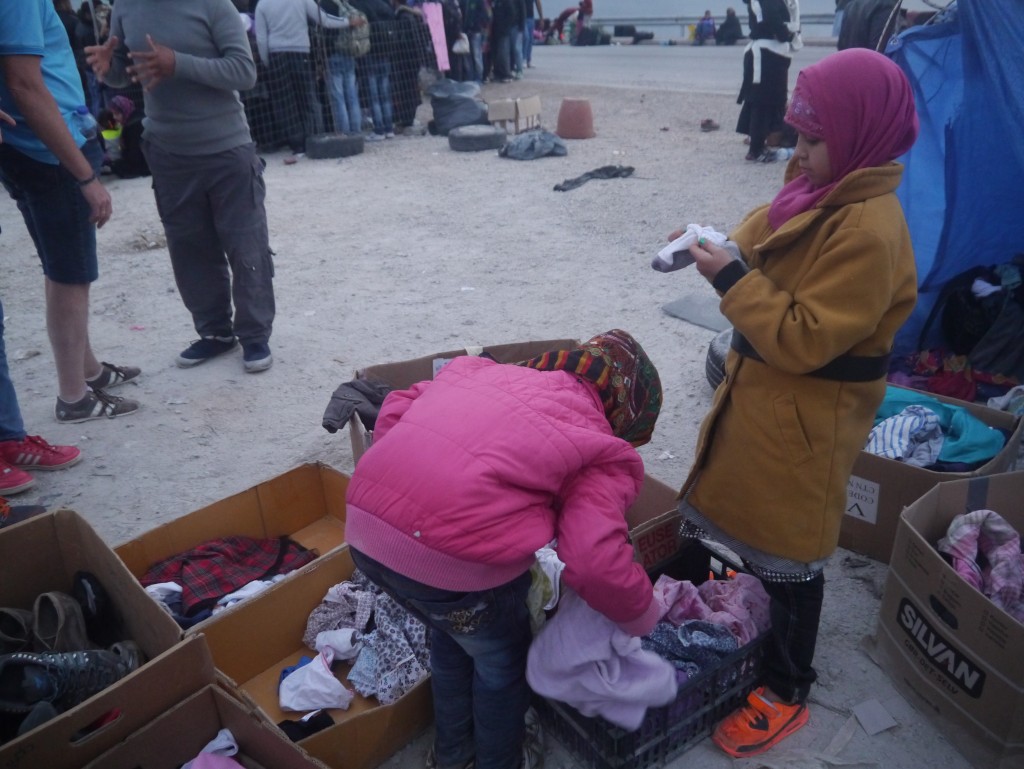 What happened to the refugees once they’d arrived in Lesbos?

The refugees had to stay at the Oxy camp sleeping outside until they could be taken to Mytilene to register. Even if they had money, they couldn’t get a taxi to take them to Mytilene without being registered. So they had to wait to be taken in a bus. Some got fed up waiting and started to walk – 65km!

The average was about 4000 arrivals per day but when the weather was calmer, more people would try the crossing. People were arriving and then phoning friends and family still in Turkey to try to make the crossing themselves. They told me there were 4 million people waiting in Turkey to come over. There were Syrians, Afghans, Iraqis, Iranian and even Pakistanis coming on the boats.

The refugees get taken to Mytilene for free to register, but after that they’re on their own with no other financial help. The boat ticket from Mytilene to Athens is €60 which many of the refugees just didn’t have. The Syrians, many of whom had sold their houses, had money with them, but many of the other nationalities didn’t. They had to wait 3 or 4 days to get the bus to Mytilene. All the people I spoke to wanted to go to Germany.

The camp was probably designed to house only a tenth of the actual number of refugees there. Whatever money was being made available to help didn’t seem to be making its way to the refugees themselves. There were only three portable toilets! The place stank and there was rubbish everywhere.

It was terribly upsetting how few resources we had. People queued for two hours to get their sandwich and we had to mark people’s hands with a dot to make sure each got their ration and no more.  Some of the men got upset when we tried to feed women and children first, they were so hungry. 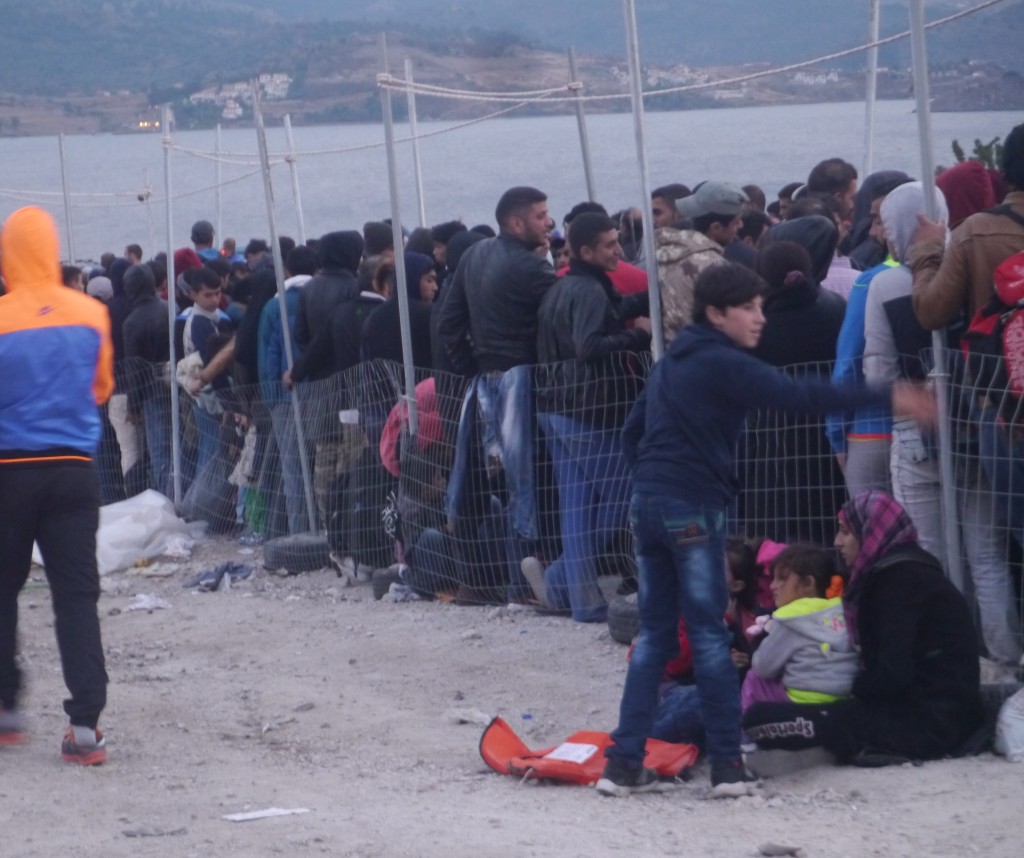 Someone is making a lot of money out of this crisis. It costs €1000/1500 for each person to make the crossing from Turkey to Greece.  So if 7000 people are arriving in one day, each having paid at least €1000, that’s over €7 million changing hands in one day.

Tell us about the people you met

I talked to a lovely Syrian woman sweeping her tent who said her village had been bombed and ISIS were surrounding it. She spoke brilliant English. One young Syrian man said his university had been bombed. Another boy was always trying to help us and lifting the water bottles. They had nothing to do but many tried to keep busy while waiting for the bus.

They were incredibly resilient. I was walking to the house where the dry clothes were kept and suddenly there were lots of people. There was a woman in a wheelchair carrying a child and the men were trying to get her down the slope. I asked them to wait and I would try to get a car to take her down. By the time I got back to them they’d gone. They had carried the woman down the hill in her wheelchair.

Another guy I met had fled to Syria from Palestine and was now fleeing Syria. He was only about 25. Syria had taken in lots of refugees in the past but the Syrians were unable to find countries to take them in when they needed help. Now it’s getting so much colder and there’s no shelter for these people who continue to arrive.  It’s a desperate situation.

How can people help?

People can contact organisations involved, raise funds, send items, find people who are going and send them with funds or items, lobby to ask government make changes and accept more refugees. I’d like us to do more for the real refugees who desperately need our help.  It’s easy to not see what’s going on when it’s not right in front of your face. 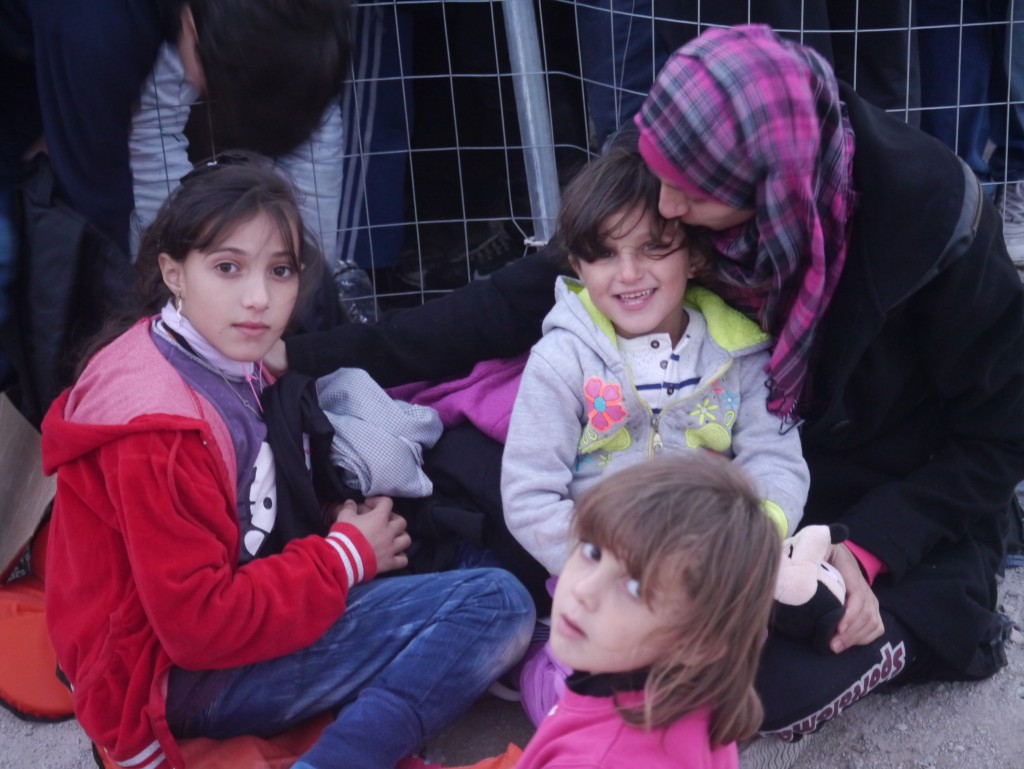 You may also like Time For Volunteering and Why Timor-Leste Needs Us To Take Notice. 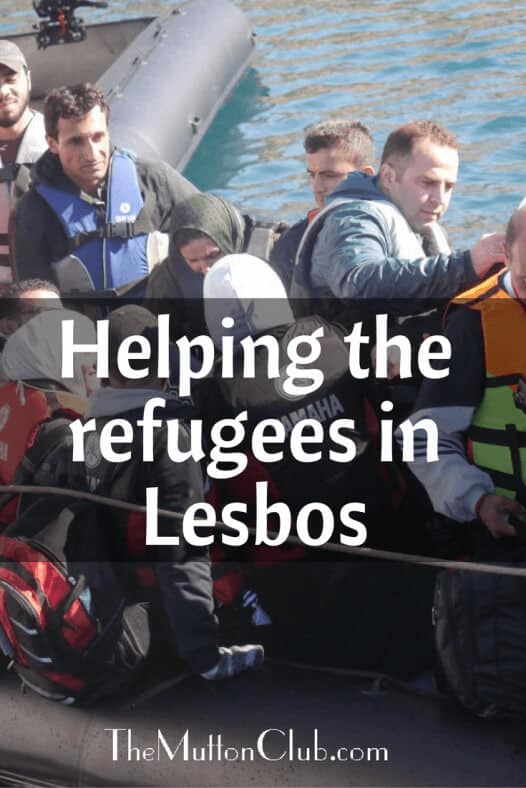 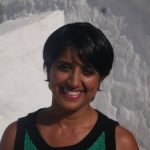 Kulvinder Jhalli was born in Wolverhampton, to Indian parents who emigrated to the UK in the 1960s.  She’s been living in London for nearly 20 years. She had a long career in medical sales and now works in property. She’s very passionate about helping others and has volunteered with other charities in the past. 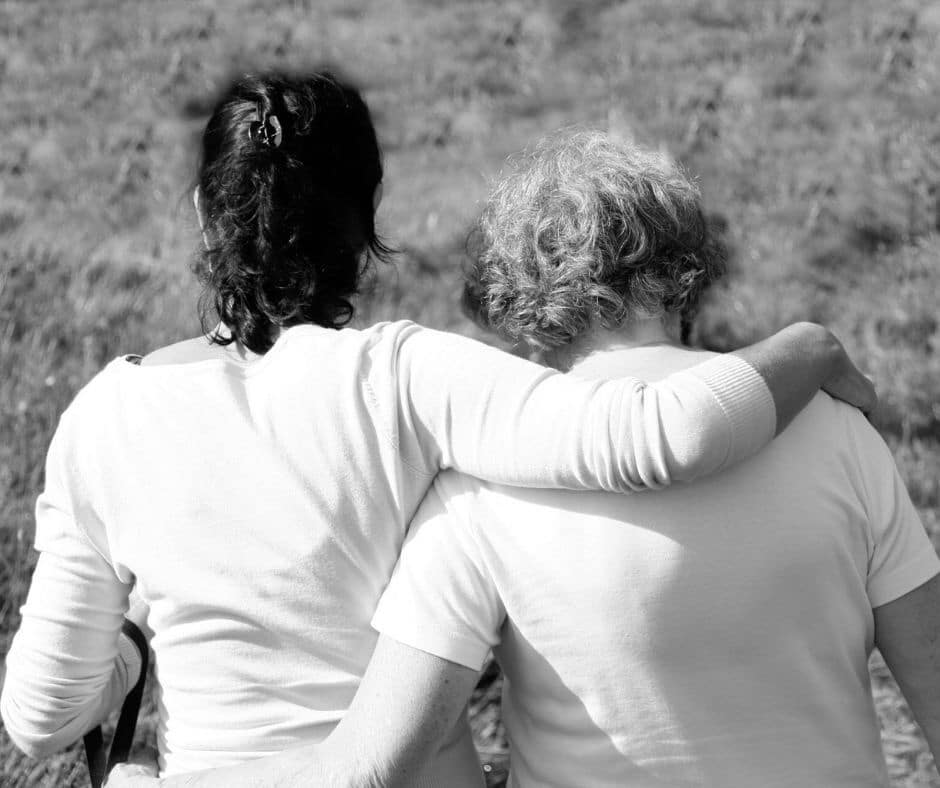 A personal tale of healing from an estranged mother daughter relationship, allowing love and caring at the end of life. 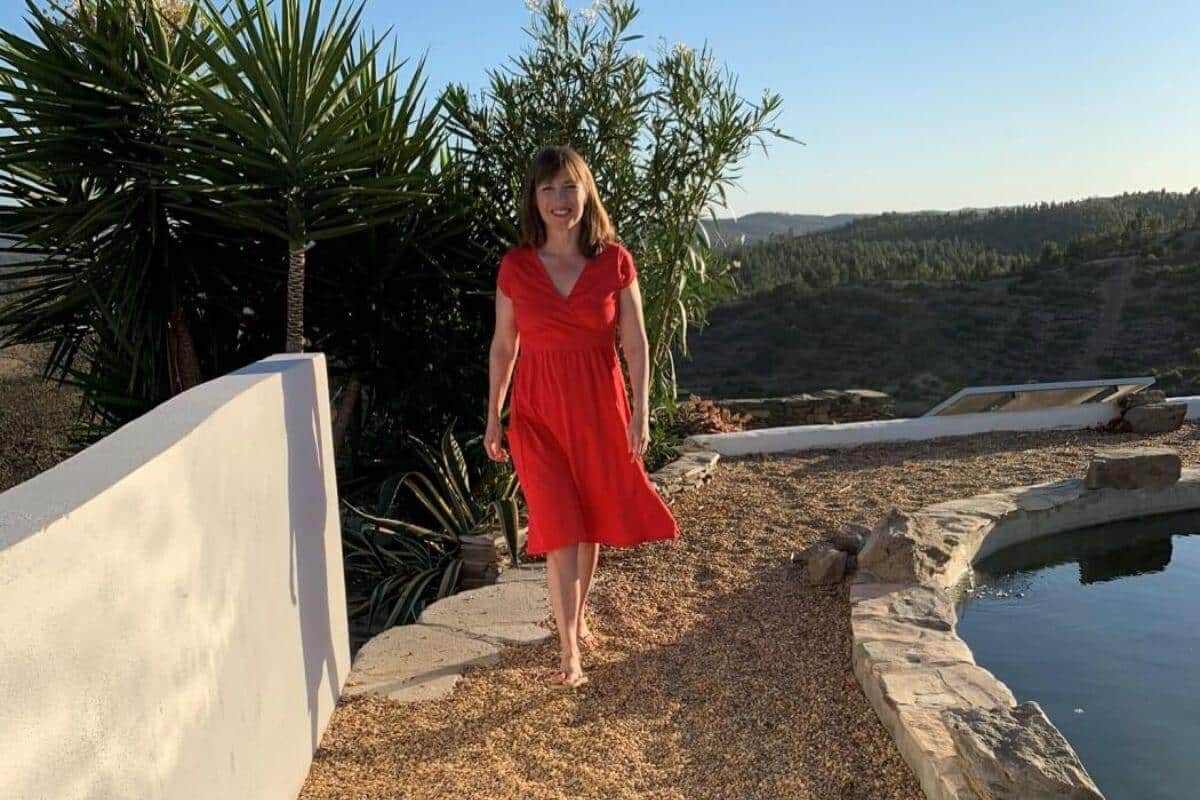 Never a fan of charity or vintage shops, it took a long time for this writer to finally realize she could shop second hand online! 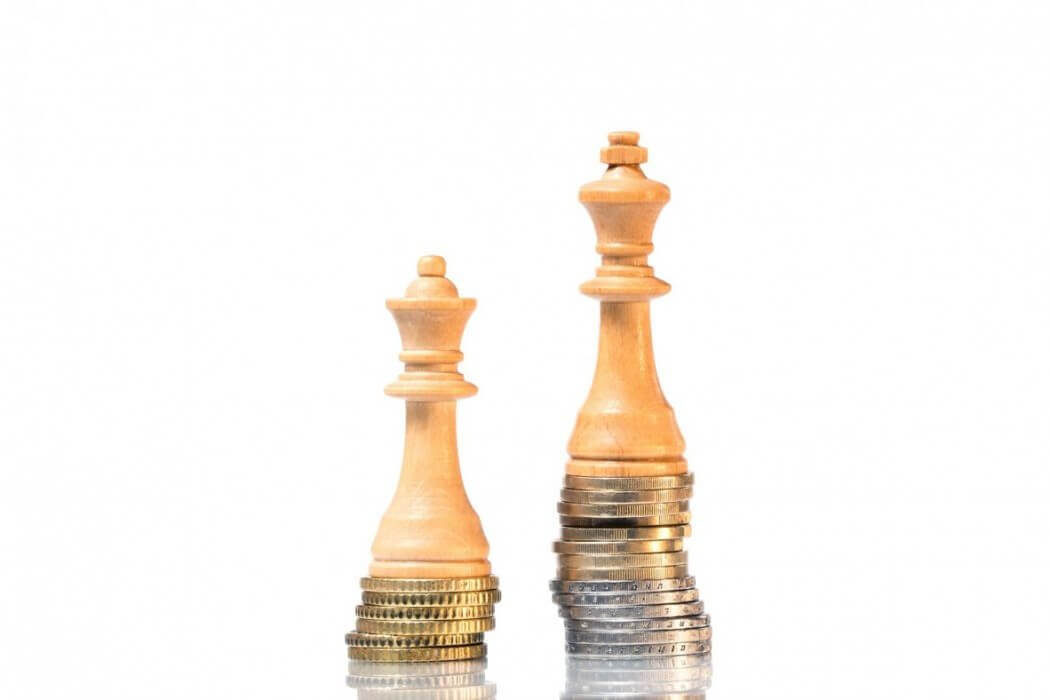 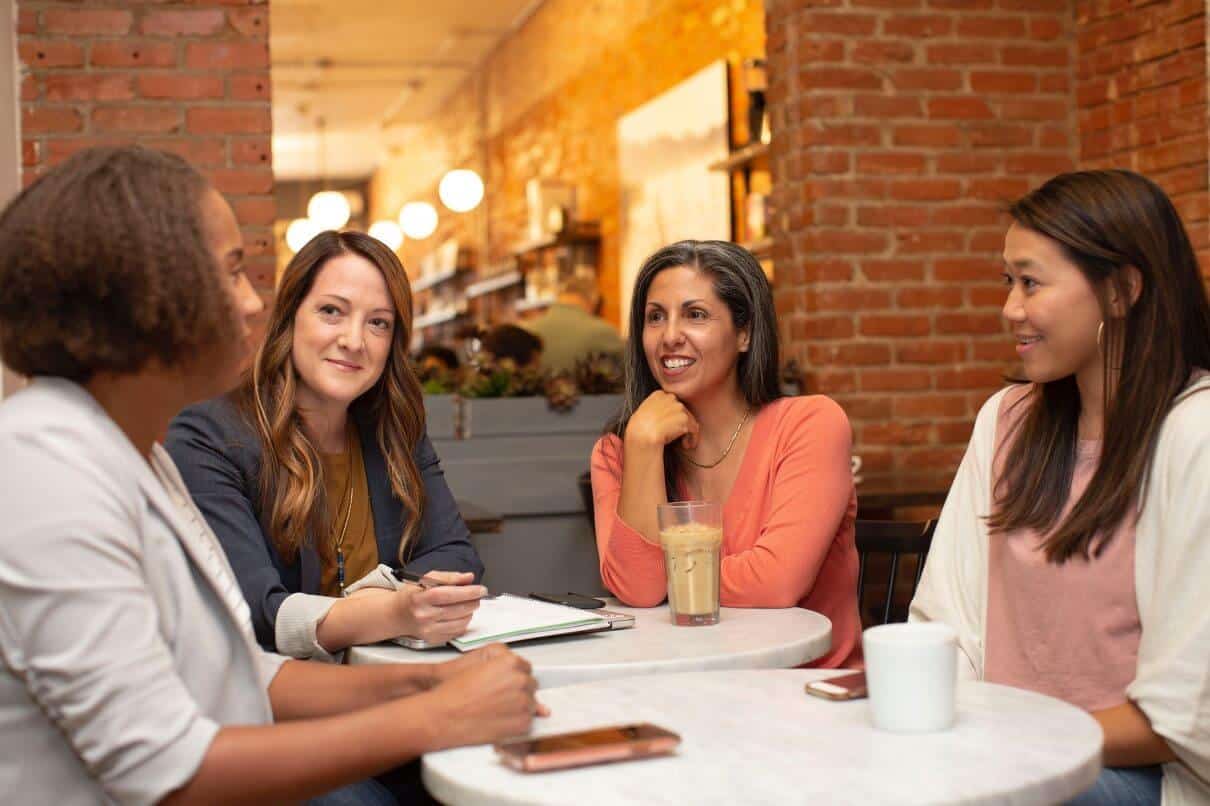 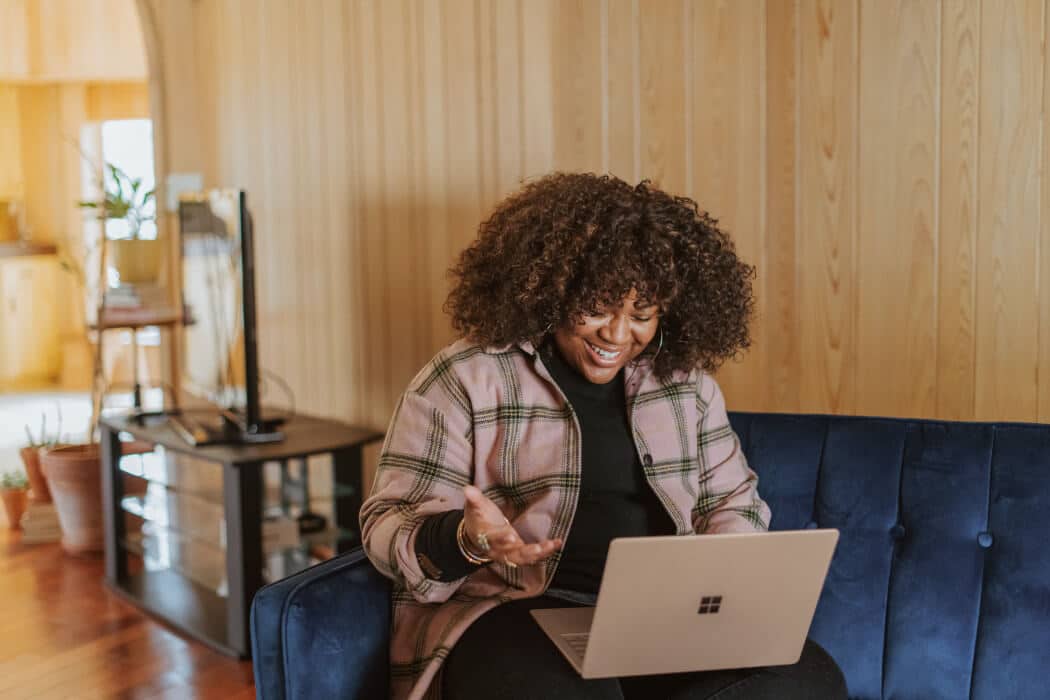 Working from home often means more time spent on camera. Here are some tips for how to look good on a video call. 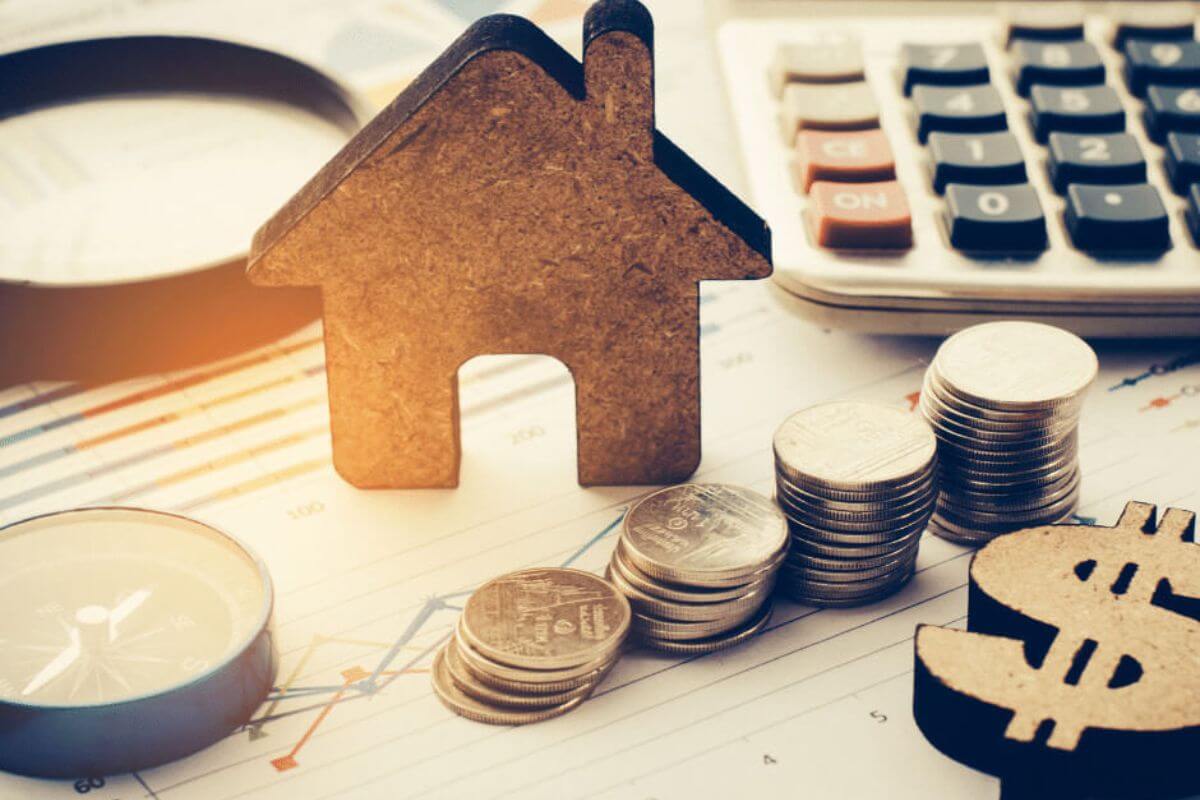