Have Your Say! What Women Want 2.0 Survey

We recently became aware of a rather amazing initiative going on to find out what women want. Yes, what you really, really want. Asking women directly what we want!

Twenty years ago, the first What Women Want survey was carried out. In the days before the Internet and social media (those days did exist, right?) women were invited to write their views on postcards, many of which were left in branches of the Body Shop. 10,000 women took part in that ground-breaking study that changed the course of British politics. 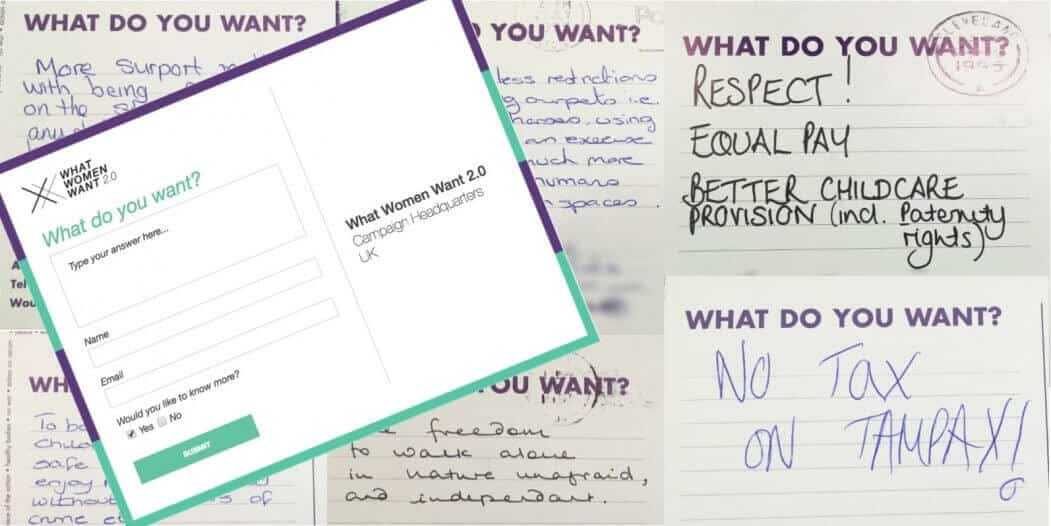 Amazingly the first survey brought changes in Labour Party policy which then went on to influence government policy. Who knows what we might achieve this time round?

The aim of What Women Want 2.0 is to make women’s voices heard – even more loudly this time. The campaign wants to reach as diverse an audience as possible, capturing the views and opinions of women across the UK. Given current events, it feels like a very important time to give voice to women again.

In the short-term, the campaign’s aim is to influence public and political debate, as before, but the findings will be made available to any organisation that wants to forge a deeper understanding of women and what matters to them.

It’s a whole different ball game in 2016. This time around What Women Want 2.0 has the interweb! All we need to do is click a button to tell the organisers what we really really want. Who wouldn’t want to tell the world what they want? Don’t we crave being listened to? Now is our chance! Wax lyrical ladies!

Now is your opportunity to contribute to a female version of society. Make that female voice heard. Make your voice heard. What do you want? Please tell us.

In 1996, 10,000 women responded to this request. Just think how many can respond now! Please tell your friends and contacts to add their voices to this project. The campaign wants 1 milion women to tell the world what they want.

Please watch the video at the top of this article, follow the link and fill in your own response to the question: What do you want?

How often does anyone ask you what you want? And how often do you get the chance to tell the world. And perhaps change the world in the process. As women are beginning to lead the Western world, now is YOUR chance to have your say.