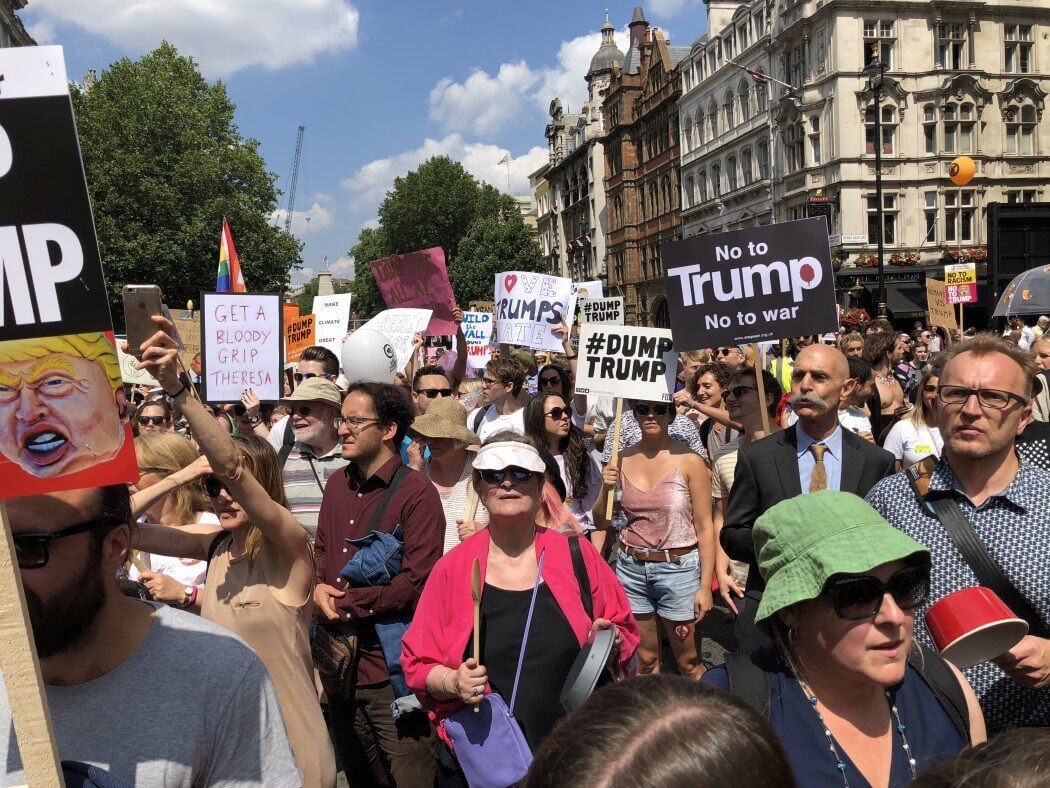 What a Friday the 13th! The day I joined the anti-Trump protest in London. The last demo I’d been on was the Women’s March in Washington 18 months prior and the day after the latest inauguration. With Trump having just landed in the UK for his not so ‘state’ visit, I felt I needed to go and participate again.  Somehow I had to make my voice count.

But in the morning I was feeling a little jaded and close to wimping out and not going. But then the US Osprey helicopters which had been looping over my garden on and off all week began again. They swooped low over the buildings, making a huge noise and looked very menacing. 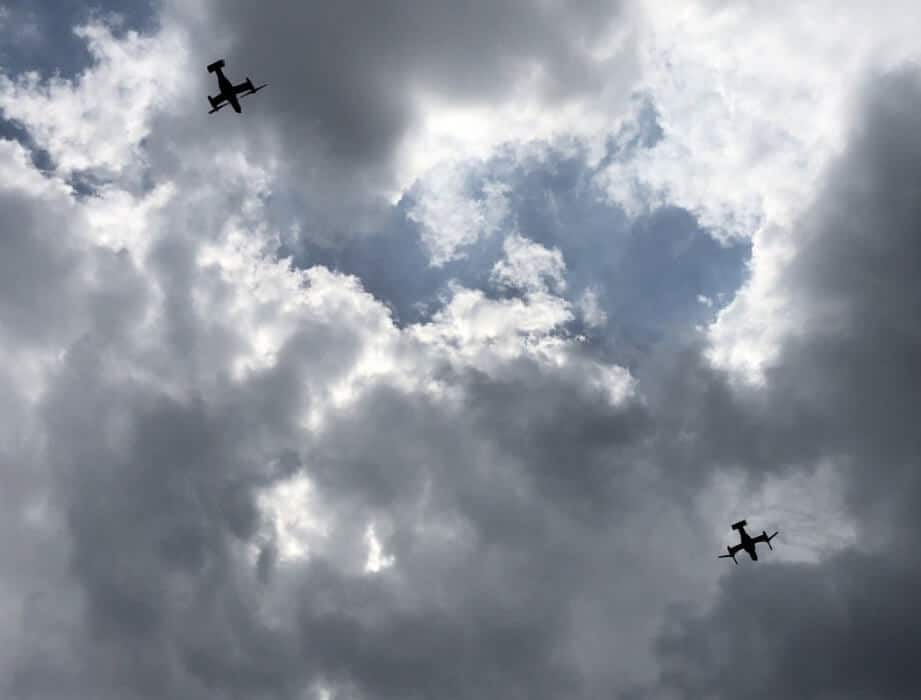 Earlier in the week I’d got very excited about them as I thought they were something to do with the RAF centenary fly past. But then Twitter informed me they were in fact US military aircraft, more often used against enemy combatants in Afghanistan. They’d been surprising and annoying Londoners all week.

I wondered why our government was allowing non-British warplanes to fly over London. What did they think was going to happen? It made me think about the last foreign head of state who sent his warplanes over the capital. And when that thought entered my head, my decision was made. I just needed to make a banner.

So I spent an hour or so crafting one. I was very pleased with it although slightly unsure how it would be received! But I thought what the heck! And for my American readers, I apologise if you find this offensive, but in British English, the word trump really does mean fart. It’s a word children use instead of fart or certainly they used to, in the days when the word fart was thought rather too indelicate. 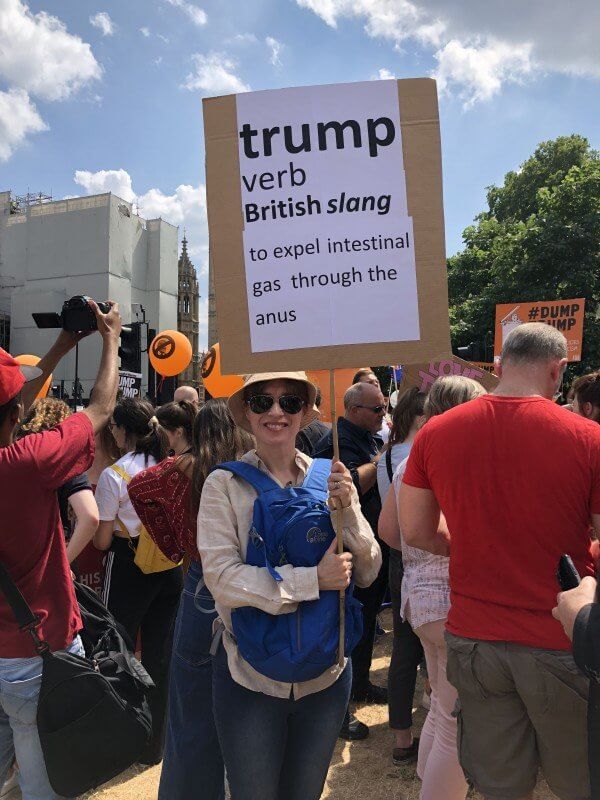 I reached Piccadilly Circus about midday and there was a portion of the march right there waiting for me! So I joined the crowds and we then marched down to Trafalgar Square, along Whitehall and into Parliament Square. The atmosphere was like a carnival. We were there to make a stand but it was all incredibly good humored.

At one stage I was walking behind an amazingly flamboyant group of transvestite men. Two of them must have been 7 foot tall in their huge platform shoes. I was sad not to have been able to get a photo of them as I negotiated holding my banner up and walking ahead. One of this pair was dressed all in orange, a wonderful orange dress, orange fishnet tights and orange shoes. He had on a long orange wig and he had coloured his beard orange too. He was an amazing sight.

Here are some other colourful  characters instead. 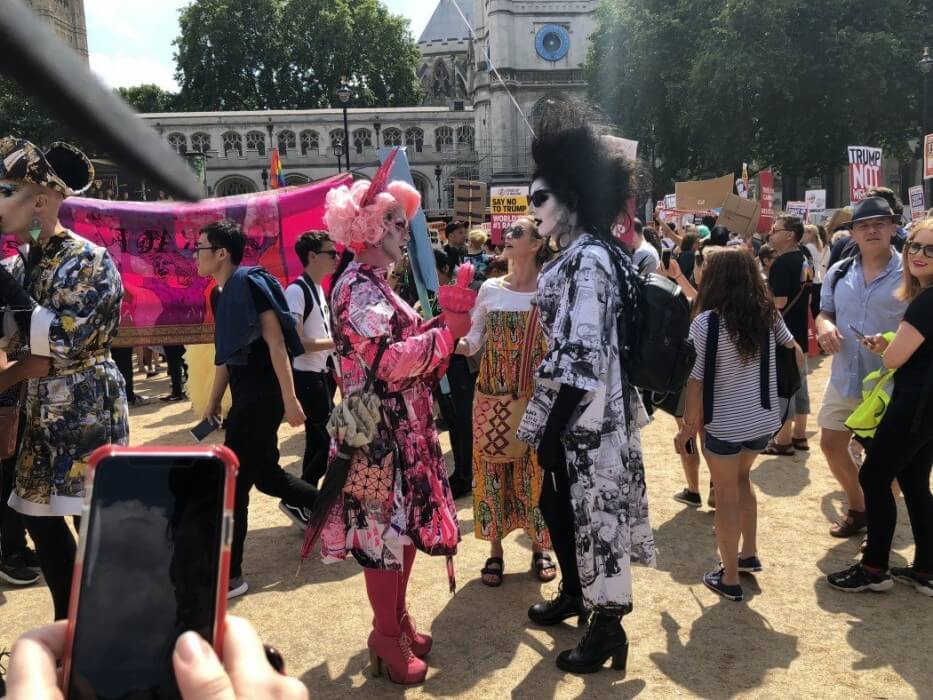 There were all kinds of people in the crowd and everyone was relishing being out demonstrating on a gorgeous summer afternoon. At one stage we noticed a solitary Trump supporter on the side of the road. He had climbed up on a wall and was waving his banner welcoming Trump. He wasn’t very well received and he did look rather lonely.

Finally we made it to Parliament Square where the baby Trump blimp was floating just above the crowd. I’d expected it to be higher and I think perhaps there were some technical issues. But it was fun to see it floating in front of the Houses of Parliament. 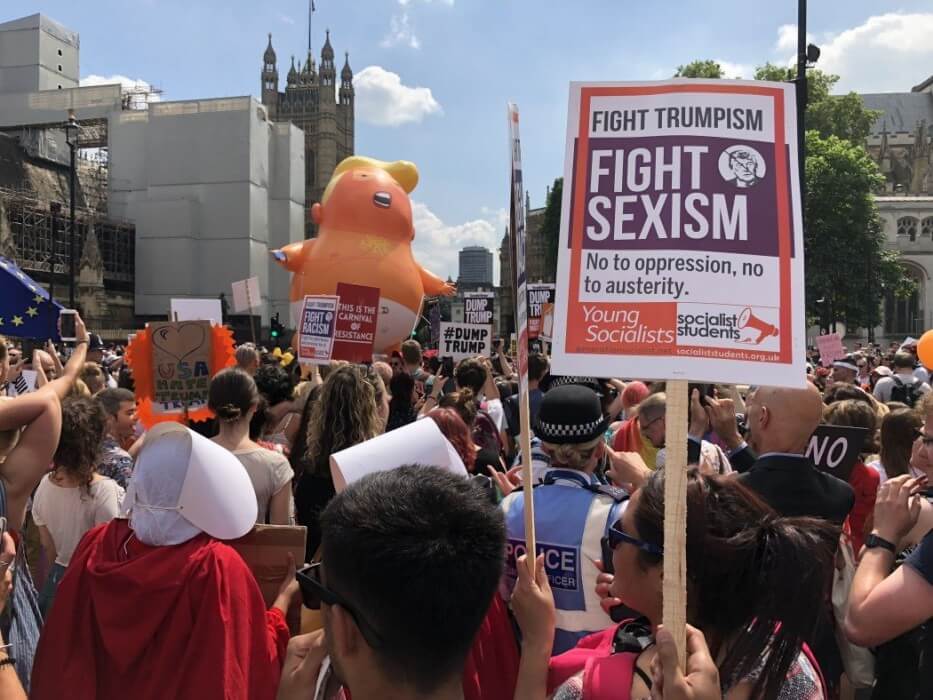 When I first heard about it, I did think it perhaps a little over-the-top even by British protest standards. But as the day wore on I became more and more convinced of the need for any kind of outlandish protest to try and make an impact on the ‘leader’ of the free world. Or at least let the world know we’re not happy about him being that ‘leader’.

In Parliament Square was a stage where people were speaking and singing, and I stayed there until about 3. People kept coming up and asking if they could take my photo! I have never had my picture taken so many times in one day!  I particularly liked this banner. Simple but effective. 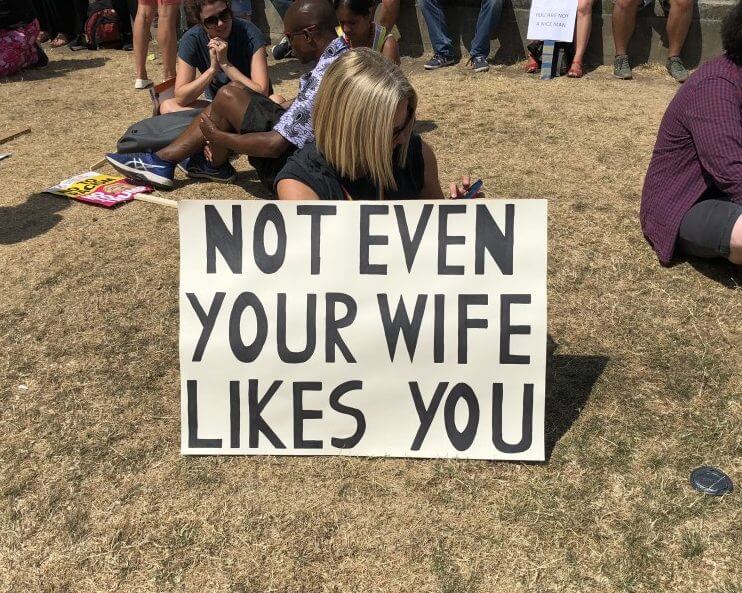 I was also interviewed for Dutch news but I suspect it never got onto the actual program! I got a bit tongue-tied when the presenter asked me why I thought the British in particular were  protesting more than other nations. She mentioned our ‘special’ relationship with the US. I wish I’d had a snappier answer, but it was interesting to me that maybe we were making our voices heard more than other nations.

I think, on reflection, perhaps it is because of that so-called special relationship, that shared culture and language. And our shared history. While we may still love the country and her people, many of us feel repulsed by her president.  Personally, he stands for everything I despise, I find him incredibly divisive and having him in such a position of power frightens me. He is racist, sexist, anti-LGBTQ, has bragged about groping women, separates children from their parents and puts them in cages, he lies constantly, degrades the best of the press, ignores climate change, has begun a trade war with the world – the list just goes on and on…. 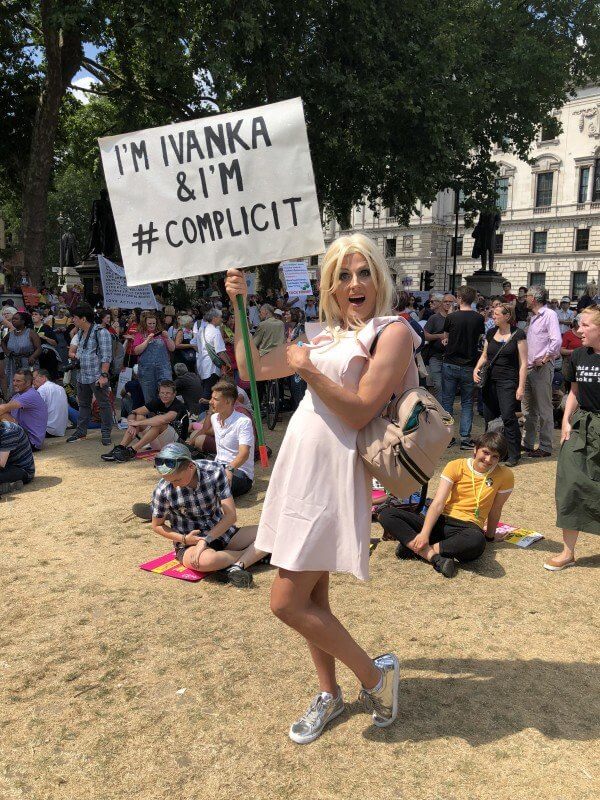 One of the most chilling images of the day for me was the number of women who’d dressed up as handmaids from The Handmaid’s Tale by Margaret Atwood, in long red dresses and white, face-covering bonnets. If you haven’t read this book or seen the TV series, it’s a very challenging representation of an imagined totalitarian US society, where fertile women become slaves to men and their infertile wives. It was originally written in 1985 but feels all too uncomfortably possible in 2018. There is a picture on the Internet going around of Theresa May also now dressed as a handmaid and holding Trump’s hand. Scary stuff indeed. 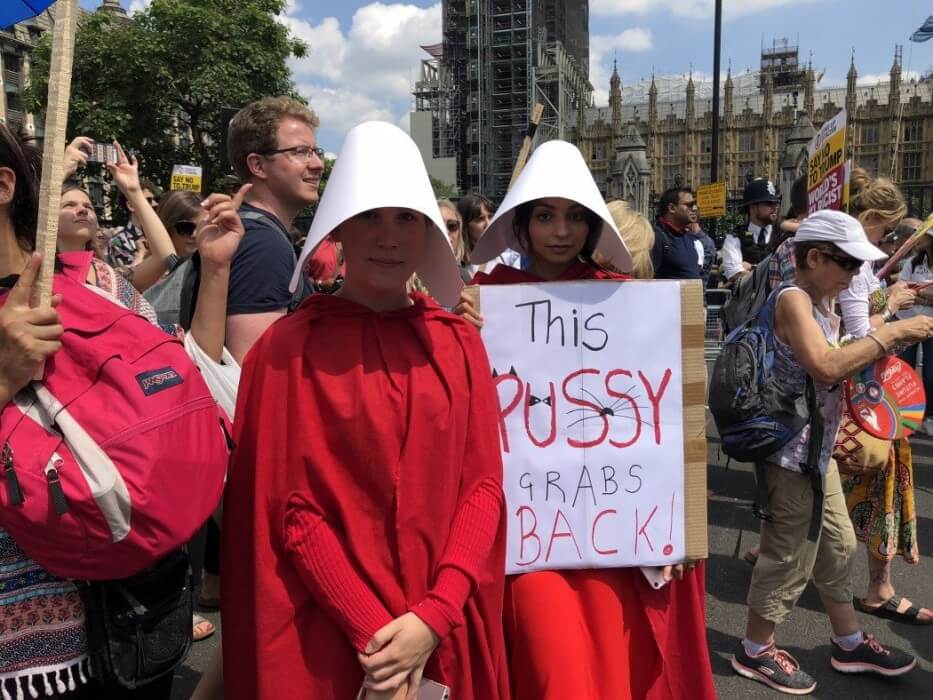 When the heat got a bit much and the crowds were dieing down, I headed back towards Oxford Circus thinking the march had ended. I was very glad I continued walking rather than getting on the tube at Leicester Square. I was SO wrong about it being over! I found Regents Street jam packed with protesters again. The march went on and on. You can see a short video of it below. I stood on the side of the march and loads of people took my picture again. One man said mine was the best banner he’d seen! “Is that true?” asked a couple. Sure is!

I arrived back at my home station around 5 and met a mum and her under 10 daughter just then heading to Trafalgar Square. How wonderful I thought. It feels crucial to me that women continue to stand up for what they believe in, so it’s great to get started young. Perhaps I should have stayed in town and joined the rally in Trafalgar Square, but my back was aching as were my feet! I did my bit at least.

Suffice to say, whatever Trump, in his delusion may have said, this was not a welcome march. I’m so proud of Londoners and those who came a long distance to demonstrate their dismay at President Fart. The older I get, the more willing I am to take a stand.  The world needs our voices, it really does. 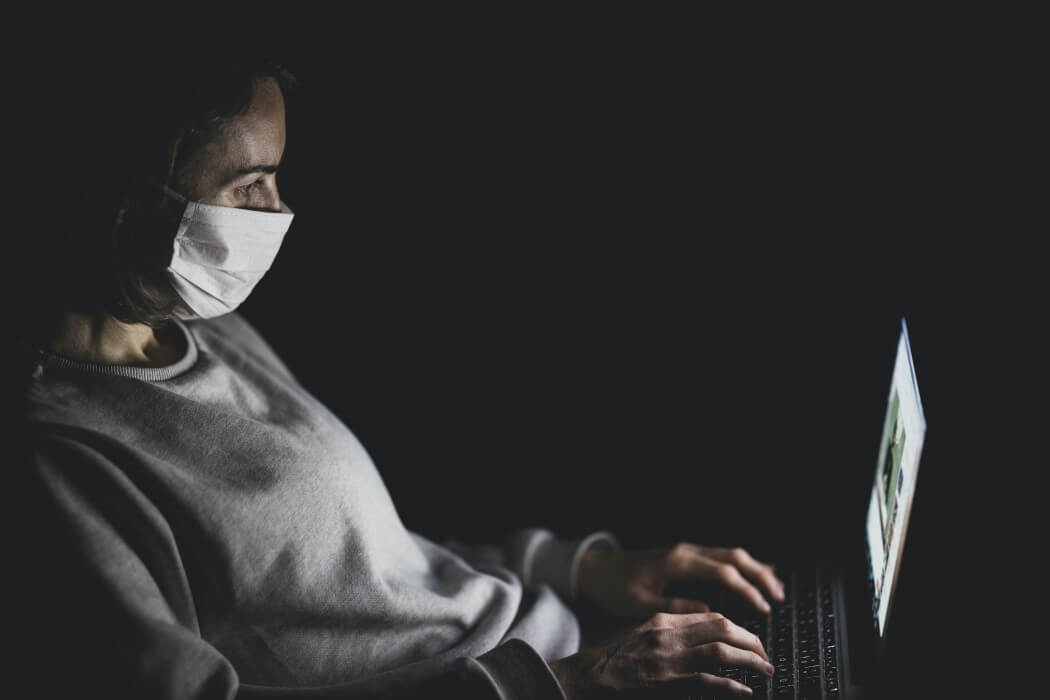 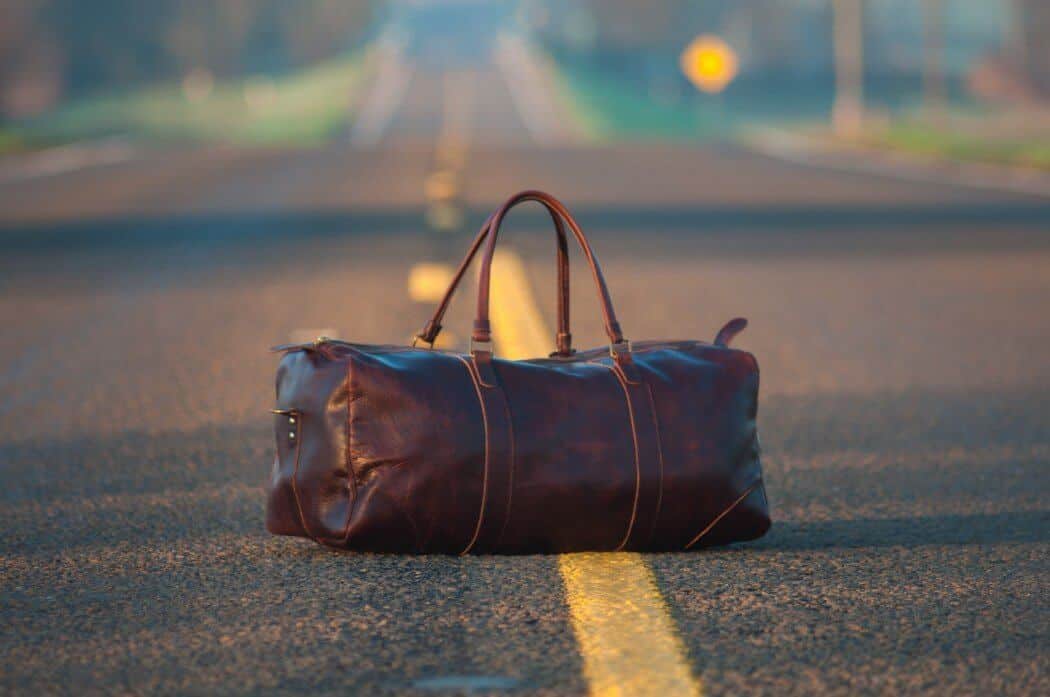 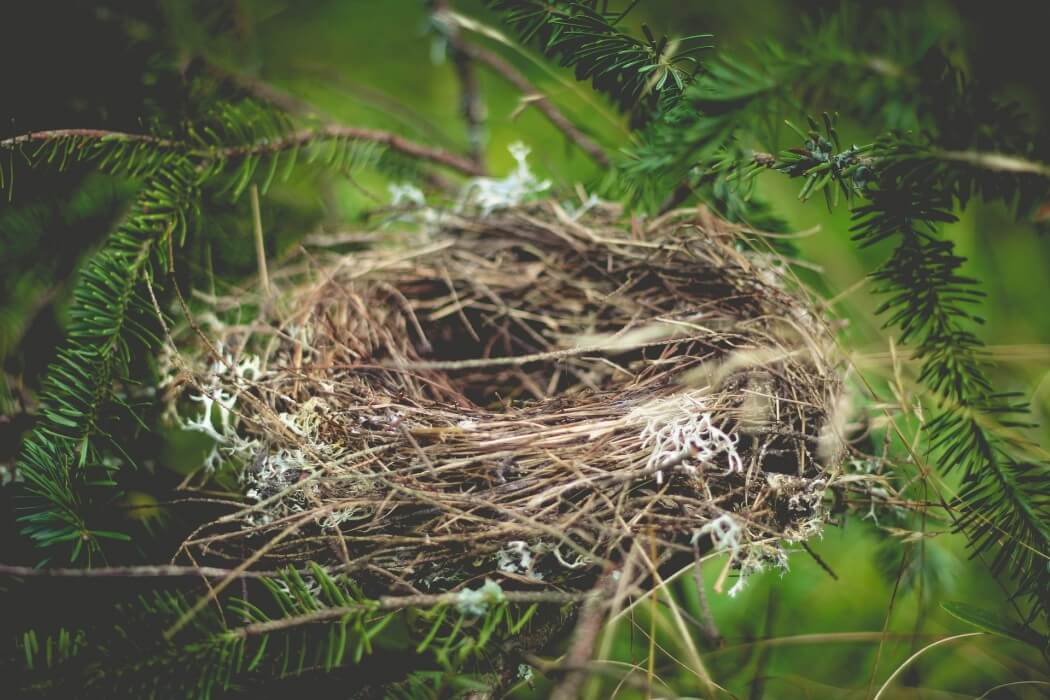 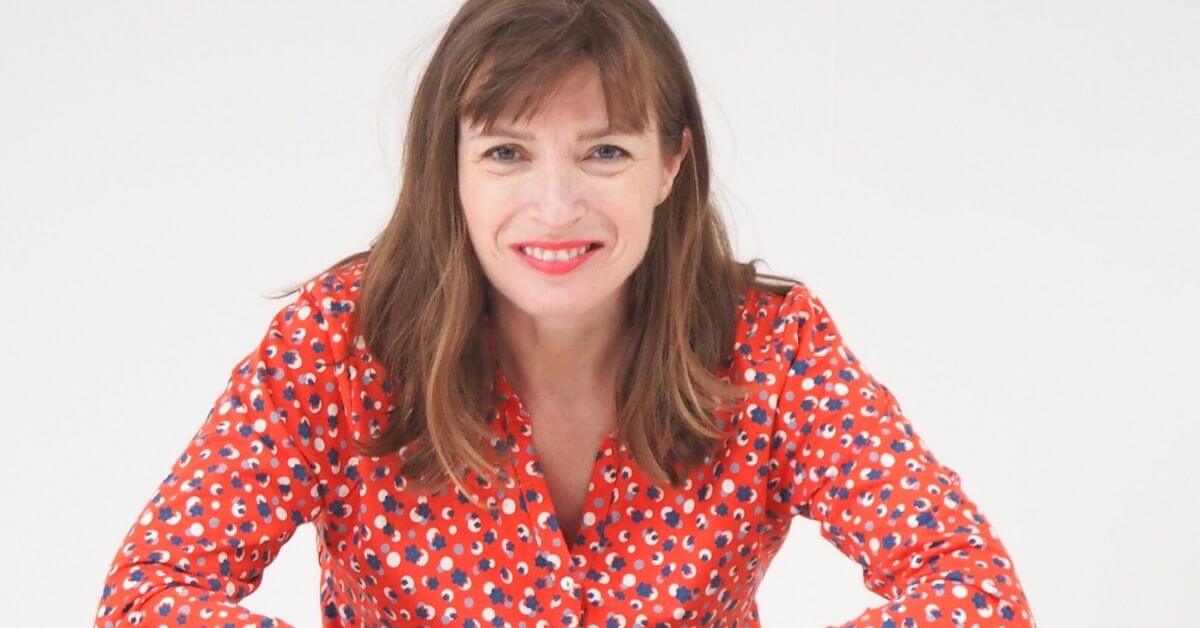 Our editor is approaching elderhood, but is remarkably calm about it. Is that strange or actually how it should be? 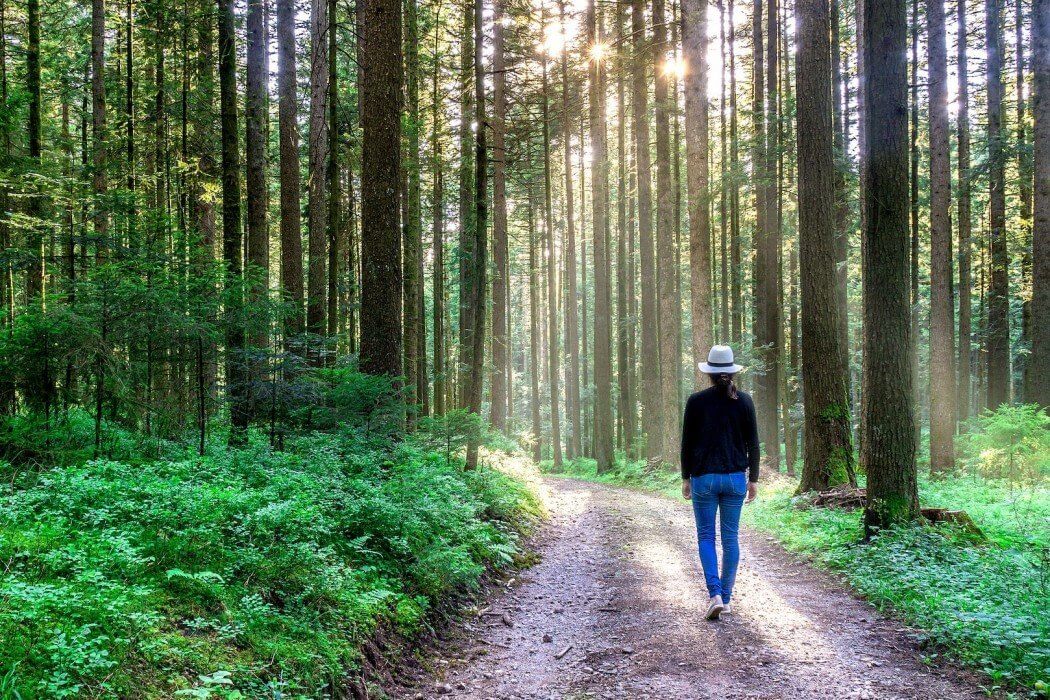 It’s so easy sometimes to get stuck in a negative spiral isn’t it! Here are our top tips to get you back on track when you’re feeling lost in midlife. 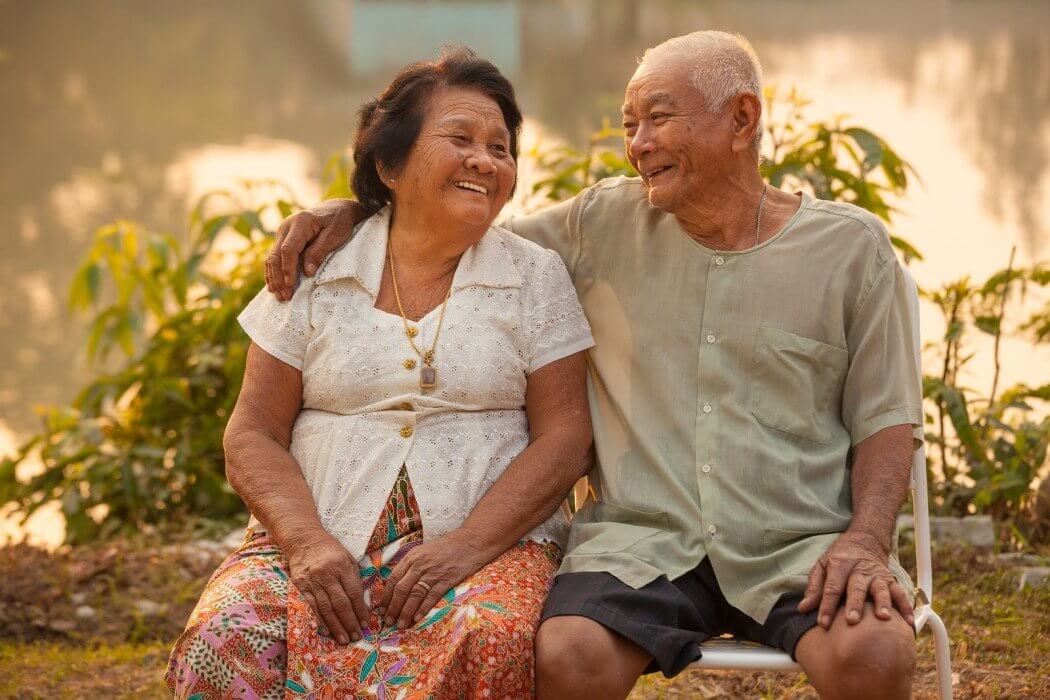